Arwen's chase scene dress appears in The Fellowship of the Ring when Arwen is first introduced. I like this dress for many reasons, mostly because it is among her more "elvish" looking dresses. Most of Arwen's costume use the same shapeless layered look with long sleeves in different colors.

Despite this dress being the first we see with Arwen, it is less popular than her other outfits. This makes it an ideal costume for me to make because I will be less likely to run into another Arwen cosplayer with the same outfit on. The scene where she wears this dress is short and fast-paced. She is constantly on the move, so its difficult to get a good look at the details in the movie. Thank Eru for the Lord of the Rings costuming exhibit.

Between the costuming exhibit and the concept art, it was pretty difficult to tell how long the dress was supposed to be. Some made it look like the dress flared out at the hips versus the waist. Some pictures made the dress appear to go down to her ankles whereas others appeared to go down to mid-calf. I designed my dress to flare out at the waist and it ends around mid-calf. In retrospect, I wish I made the grey part of the dress a little longer.

Some detailed shots from the exhibit include the embroidery on her sleeve, the butterfly buckle, and the stitching on the seams (note the braid-like stitching pattern down the front seams). While I do not have any detailed pictures of the butterfly buckle I made (I lost it), it is included in some of the photos below of me wearing the costume. The buckle was made of craft foam and painted with silver Rub n' Buff.

The costume appears to be made of a grey suede with an underdress of some white flowing fabric (real technical terms here, I know). Suede is expensive and I generally feel uncomfortable using animal skins if I don't know where they come from, so I ordered 3 or 4 yards of a faux suede from Ebay for like $4 a yard. It has a suede-like pattern printed onto the fabric, but it still has a fuzzy suede-ish feel to it. I found the white fabric in a remnants bin at a textile warehouse. Five yards wasn't enough for someone's drapes, but it was perfect for a costume. The textured inside of the collar, as shown above, was difficult to find a similar kind of fabric. I used this kind of fabric instead (below). I bought 1/4 of a yard, which was plenty.

For the skirts on both layers of the garment, they were essentially circles with slits in front and back. The skirts curve upwards in front. On the underdress, the sleeves flared at the elbow, basically like a circle skirt for arms. The lower sleeve on the grey dress is petal shaped and ends above the knee.

The ribbon was just a simple purple satin purchased from Joann's Fabric Store for maybe $5. For the embroidery and stitching details, I used silver embroidery thread also from Joann's. That stuff is a pain to work with, in the future I would probably just stick to different varieties of grey. I copied the embroidery pattern onto some dissolveable interfacing and used that to guide me. For the other arm, the design was mirrored.

Aaand putting it all together... I wore the evenstar necklace (puchased from ebay for under $5) even though Arwen doesn't wear it in the chase scene. I thought it might make me more recognizable as the character (even still, someone thought I was Tauriel at Boston Comic Con. Are you kidding me?). The wig is a lace front-brown wig secured with spirit gum (borrowed from a friend, but you can find them online for under $40). the front two locks of hair were braided and tied in back (even though in the movie, there are three tiers of small braids). Under the garments I just wore black leggings and grey lace-up boots. Not accurate, but oh well. (In the movie, she has deep plum colored leggings and the boots are a different shade of grey with less of a heel and they lace up in back). I didn't do much with makeup, mostly because I dont know how to use it. I'm just wearing some brown eyeliner, black mascara, blush, and a bit of lip color. Nothing special. 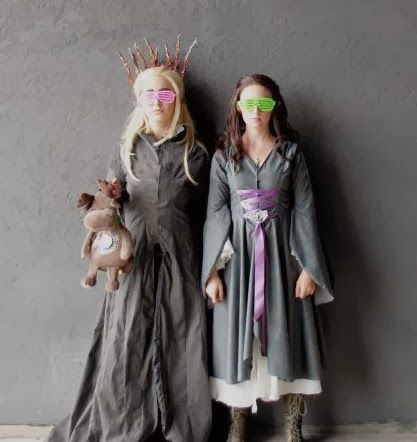 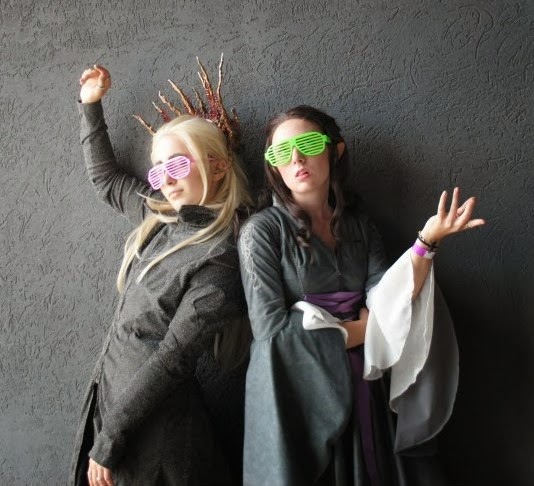 For the future, I'd like to make gloves for the costume. Arwen wears gloves from the same grey material in this scene. I'm also in the works of procuring a resin copy of Hadhafang, her sword. I purchased a different wig for this costume as well. While unfortunately its not a lace-front wig, it is longer than the wig I used in the pictures above. Once again, ebay to the rescue: the wig was $10. I'm also hoping to line they grey dress with some dusky shade of blue like the one shown in the pictures from the costume exhibit.

Yaaaay that's it for now! See you next time I decide to waste my time & money on stuff I'm not supposed to.
Posted by Kayla at 2:24 PM

Email ThisBlogThis!Share to TwitterShare to FacebookShare to Pinterest
Labels: Arwen, Arwen Undomiel, cosplay, ghostpulse, lord of the rings, The Fellowship of the RIng